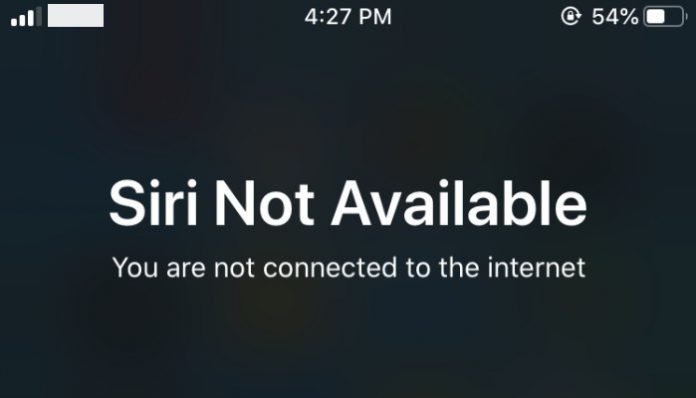 Apple created a voice command application called “Siri” for iPhone, iPad, and other Apple devices. Siri not working is a common problem that millions of consumers face. The company maintains highly optimized it and its features in check every single day. You shouldn’t worry about the software problems because they already offered official solutions for the customers. We are going to look deeper into the issue and resolve them one-by-one.

4 Ways to Fix Siri is Not Working on iPhone/iPad

Siri requires an internet connection, and I hope you already know that, so double-check, whether you got an internet connection problem or not. Meantime, I want to inform the readers that Apple servers can go down, and it directly affects its features. Maybe, the servers are down, and it is affecting the voice command feature on the phone. Fortunately, you can check the status of the server by following the instructions.

The official website frequently updates information on the server status. By refreshing the page every 60 seconds will give you accurate information on what is working and what isn’t working right now. Many worry about online threats and installing third-party software to check the status. The online status is an Apple official website, and it is using web-application to view further details.

When an iPhone or iPad powered on for the first time, the owner of the device asked to provide or create a new Apple ID. During the phone set-up, the iOS automatically configure the Siri voice function. Unfortunately. First-time iPhone or iPad users do not realize it because they are aware of it. In those scenarios, iOS does not enable the functions, and it keeps the voice function disabled. Fortunately, iOS users can enable it in the settings, and I will guide you through it.

Restart the phone to make the changes permanently. iPhone’s or iPad’s do crash depending on the scenario or if they are suffering from mishandling. Power off the phone and then turn it back on to check, whether the option is back to disabled mode, or whether it’s running efficiently. In case, voice command is disabled again, and it behaves inaccurately, then follows the next solution to resolve the matter.

3Ensure that “Hey Siri” is on

Skip this paragraph, if you already used Siri in the current device. Apple reported that they have new customers trying the device for the first time, which clearly states that millions of people do not know how iOS works. Of course, the average consumer can figure out the essential functions, but they cannot master it in one single day.

For iOS 10, go to Settings > Siri or General > (turn on voice command) Siri and tap to turn on “Allow Hey Siri.”

In order to wake up voice command, the owner of the phone must face the phone straight and say “Hey Siri.” In Android phone, by calling out “Ok Google”, the voice commands responds. However, iOS indicates Siri to disable, when the owner’s face is down. It might surprise the first-time Apple consumers, but that’s how voice command designed to function on an iPhone or iPad.

4Turn off your VPN

Many iOS customers reported that VPN doesn’t sit well with old VPN configuration after software update. Millions of people face plenty of errors and problems before & after installation. Everything has a perfect solution, and we recommend the readers to delete the old VPN configuration. By removing the profile, it will open newer paths to resolving the issue.

Create a new VPN profile after restarting the phone. The problem should be resolved by deleting the old VPN and testing the Siri Artificial Intelligence voice command.

Siri is unable to recognize my voice

Voice command AI cannot recognize everyone’s frequency because there is a voice pattern called “accent.” You may speak English, but the AI designed to recognize a certain accent, and Apple solved it a few years back. They recorded hundreds of languages and accents to make AI more powerful.

I have selected English (India) because I’m an Indian with an Indian English accent. There is no secret that Indians can pronounce the English words correctly because AI can make a mistake because Apple designed it to recognize an American accent.

By following the solutions provided in our tutorial, you should be able to fix Siri is not working in a few minutes. Resetting the phone does bring data loss risk, so I recommend the readers to back up the data locally or on iCloud service.

How to Change Message Bubble Color in iOS

Dark Mode on Instagram on the iPhone, iPad, and Android

Audio Not Working in Windows 10? Here’s the Quick Fix

Dark Mode on Instagram on the iPhone, iPad, and Android

Audio Not Working in Windows 10? Here’s the Quick Fix

AirDrop Not Working on iPad and iPhone? Here’s the Real Fix

How to Record FaceTime Call on iPhone, iPad, and Mac

Face ID Not Working on iPhone or iPad? How to Fix Easily