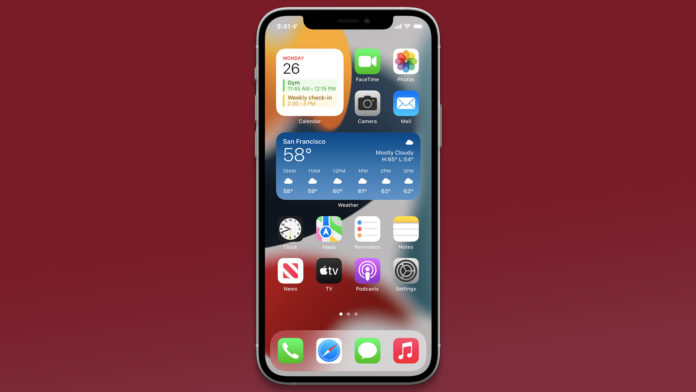 iOS software is a slow progressing operating system when compared to Android. Maybe, Apple doesn’t want to experiment with the market and what users are asking in the next update. Nonetheless, iOS 15 widgets have changed the landscape in the device and overall experience. I have compiled a list of iOS widgets that will enhance your experience including inbuilt widgets and third-party add-ons.

Apple added several interesting iOS 15 widgets. I will show you how to add widgets on the Home Screen.

Press the Home button or anywhere on the screen to save it. The iOS widget is placed and is fully functional in the iPhone and iPad.

Apple minimized the iPhone 13 notch, but it didn’t encourage the developers to add battery percentage in the top panel. I won’t say that I have a perfect replacement, and a widget can eliminate the problem for the time being.

iOS 15 has three variety of battery widgets in the library. I’m using it for almost one year now, and it was available in the previous iOS version. The battery icon is bigger and shows the percentage instantly.

One display and hundreds of widgets in the device.

How are you going to manage them all?

Apple software developers thought of this and added Smart Stack in the library. You can add one widget on the screen and access all of them in it.

You can swipe down on the widget, and it will switch to the next one instantly. I have added multiple Smart Stack widgets on one screen and switched to another app. You got three sizes on the iOS device, and you can preview them in the library.

Negativity is spreading around the world due to the pandemic and work pressure. You can add the Photos widget on the screen and view family photos, and it has a positive impact on our mental health.

The Photo album displays the top picture taken earlier. Of course, you don’t have control over what to view in the widget, and that’s what it lacks. Nonetheless, it’s a good widget in the iOS 15, and it has helped me fade the negative energy away within me.

Do you travel a lot?

How often do we check the weather on the news or in the dedicated app? I don’t recall doing it in the past, even when I needed it the most.

The weather widget is available in the library in three variants. I selected the small icon version because it’s convenient and doesn’t consume lots of space on the screen. You an entire week forecast in one layer and find out the current temp in Celsius or Fahrenheit.

News is important, and I care less about the magazine since it mostly covers celebrities only. It’s essential to have information on what’s going around in the neighborhood. Keeping yourself updated about the local news gives birth to new ideas and opportunities that makes the world better. One news widget on the Home Screen or any other screen keeps you updated.

Sleeping is a crucial part of the health system, and iPhone has dedicated functions to track sleeping habits. Nobody has the time to monitor sleep habits on daily basis, so the widget will help you in keeping a track of it. You don’t have to open the health app every day and monitor the sleeping stats manually. Take a quick look at the widget that gives you an idea of the habits. If you find abnormalities or improvement, then you would know it immediately.

I communicate with clients and customers over email. I have an active Google Mail on the iOS device, and it comes with a compelling widget. You can view emails associated with the account as if you have opened it in the dedicated app.

Third-party developers have taken advantage of the widget feature introduced in iOS 13 and added innovative ones to the lineup.

Smart Battery app displays visually appealing widgets that go through the Battery stats. The app has several designs that match the Apple Watch layout, and you can add them on the main screen.

Take a quick look at the snapshot that I shared above, and that should be enough to give you an idea of it. iPhone is a powerful device but boring at the same time, and it’s a perfect replacement for the traditional battery widget.

Do you want to wish someone a happy birthday?

But, it’s easy to forget the important day due to busy schedules and personal matters.

You can use your iOS device to add a count down on Home Screen and always remind yourself about important birthdays.

Setting up the countdown clock is easy, and never miss an important day.

The world loves animals, and I’m a dog guy. There’s a fun widget designed for iOS 15 devices, where you can create a virtual pet in the app. I want to talk about the petting game, but you should give it a try. Do not worry about the slowing down iPhone because it doesn’t harm the device.

I want to leave you in suspense, so you would give the widget a try.

Many interesting widgets are available in the App Store, and I will continue to update the list as I come across new ones. iOS 15 is an improvised version of iOS 14, but it supports almost every widget that was available for the previous edition. So, your iPhone or iPad won’t have any complications finding the Apple-developed widgets and third-party widgets. Let us know what do you think about the widget feature in the iOS environment.