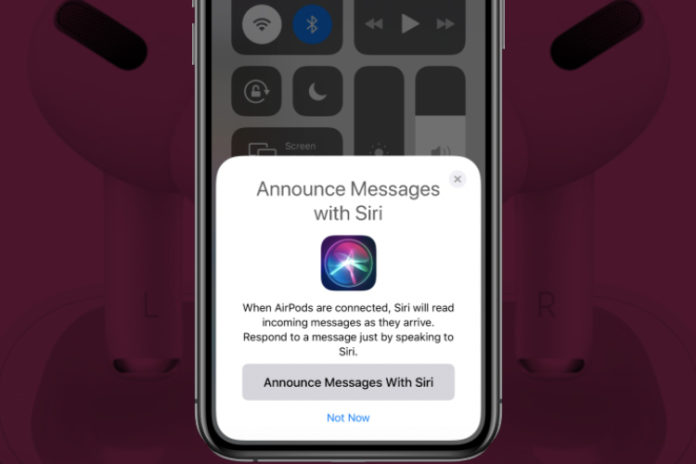 Apple introduced the announce message feature in the iOS mobile operating system, and it is one of the innovative functions in the device. Millions of iPhone device owners are using the feature as it makes it easier for device owners. However, we have found that the majority of the users don’t know how to turn on and turn off the message announcement feature. We are going to show how you can enable/disable announcement text messages on an iOS device and make sure not to miss any part.

What is Announce Message Feature?

Announce message was brought back in iOS 13.2 version because of the consumer demand, and Apple improved the feature further. It is an advanced function that allows new notifications to be announced. Yes, new notifications will appear on the screen, but the iPhone or iPad will announce it, so you can find out who has texted you. You don’t have to look at the screen to find out about it and listen to the alert instead.

Apple understood that it invades the privacy of the users, so they made it available for AirPods via Siri.

Announce Siri may not work with third-party wireless devices, so don’t get disappointed if your wireless earphones don’t work.

Of course, it is an interesting feature that you should try, but it may end up being annoying.

How to turn on message announcement?

Pair AirPods with iPhone via Bluetooth connection, and that’s how it all begins.

You have to do this for the first time, and then it will be the primary setting till you disable it or make changes to the settings.

How to change Announce Messages app?

The latest iOS version allows the users to select one app in the settings and let Siri announce it in the AirPods. However, you can select one app only, and it doesn’t work with multiple services. Of course, the Cupertino-based company might bring multiple services options in a later version, but you have to stick with one app as of now.

You have successfully selected specific messages app, and Siri will announce messages whenever you receive a text message. Remember, you may not have a lot of customizations here because it is a limited technology. Device owners have to wait for another major update because the official developers never release an underdeveloped software.

How to Manage Announce Messages with Siri

As we have mentioned earlier, the announce feature does not have a lot of customizations. However, the Apple developers team added basic functions, and one of them allows you to receive announcements from everyone, contacts, recent and favorite. In short, you don’t have to focus on unnecessary text coming from unknown contacts.

We have to say that it is an interesting feature that most of the users need. We loved the “favorite” option so we can learn about new messages coming from important contacts only.

How to Turn off announce text messages with Siri

You have to pair AirPods with iPhone via Bluetooth connection and wear the earphones in your ears.

The feature is turned off in your iOS running iPhone & iPad. You can double-check as well, and it won’t work anymore until or unless you turn it back on.

The majority of the iOS device owners don’t know how to use “Announce Messages with Siri” due to a lack of knowledge. However, Apple made efforts to make it user-friendly, and it is fairly easy-to-use. We implore the readers to play around with the functions and tell us which part is difficult in message announcements.

[Fix] Why does my iPhone keeps saying call failed in iOS 15?