How to create, send, and vote a poll in iMessage group chat 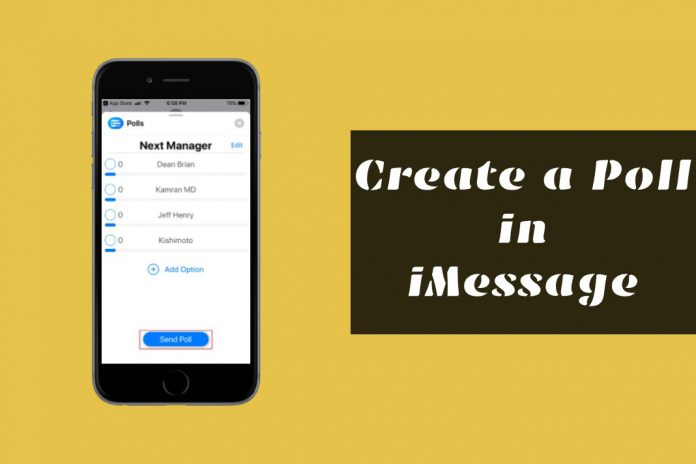 Deciding the next manager of the store could be a hassle, and iMessage can come in handy in making a final judgment. Why not create a Poll in iMessage for the team member’s opinion? Apple managed to tweak the service over the years after listening to the professionals, students, college students, and others. Over the years, the official developing team understood iMessage is extremely popular among teenagers and young people, so they have to keep up to the trend.

Can you create a Poll in iMessage chat?

Thousands of independent surveys found that no company could create trends back-to-back. Apple heard the surveys after several years of lagging behind the third-party Android app developing policies. The most precious manufacturer started to modify the policies for third-party developers to add value to the iOS platform. The freedom to add a function in iMessage led to answering our question to create a voting Poll in iMessage on iPhone or iPad.

The third-party developer Jeff Henna developed Polls for iMessage app for iOS users. The professional developer noticed the lack of function in the space and then came up with a unique solution. The app allows the iPhone & iPad device owners to create polls in the group chat or one recipient. In this tutorial, I will demonstrate the application functions and create polls in iMessage.

I did this for the first time, and I was able to follow the pattern in just two minutes. Overall, the user-friendly app did eliminate complicated options and created an easy-to-understand environment for beginners.

How to vote in iPhone Text Message

I cannot exclude the voting part from the tutorial because the group members might not know about this and end up in confusion. Follow the simplified guide below to learn how to vote for an existing poll in iMessage.

The application will automatically update the poll. Thus, remaining members can view the updated list as well. Overall, the developer followed a straightforward pattern to avoid miscommunications and complications.