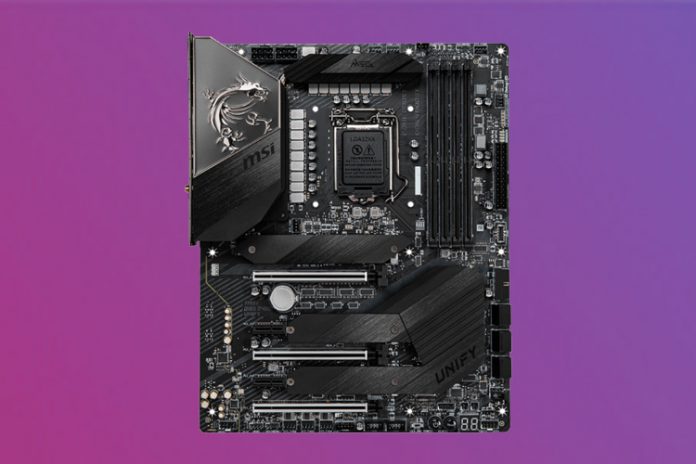 MSI announced the MEG Z490 UNIFY motherboard based on ATX design and the company launched a mini-ATX variant available for the customers. The mid-range motherboards come packed with modern functions and missing modern features. I have to point out that you don’t have RBG Lights built-in, which is a disappointment.

MSI did not compromise in build quality and I have always loved the Taiwanese choice of hardware components. My first-choice of motherboard always was MSI because of the mentioned contributing reasons. The MEG Z490 UNIFY is made from 6-layers PCB designed for modern consumers, who are looking for a solution that can run smoothly during extreme conditions.

We spend plenty of savings on powerful GPU, and motherboards don’t have high-end protective PCIe build. You got PCIe Steel Armor technology is in MEG Z490 UNIFY that protects the card from bending. The PCIe Steel Armor improves performance, stability, and ultimate build strength.

The Taiwanese manufacturer added Smart Button to power on the machine, Reset, Turbofan, EZ LED Control and Safe Mode. Unfortunately, MSI didn’t add RBG Lights in the MEG Z490 UNIFY and it would be a pleasant surprise if the company added minimal RBG Lightning.

The mid-range motherboard equipped with Wi-Fi 6 technology, which is the latest in the business. The 6th generation Wi-Fi does bring a slight improvement in connection range. The latest wireless connection technology supports BSS Color and MU-MIMO that has maximum speed download/upload up to 2500Mbps. We are not missing the latest 2.5G LAN port and Bluetooth 5.1 technology. The motherboard supports Triple Turbo M.2 Connectors with reading/write speeds up to 32GB per second.

Since SSD drives packed with the thermal shield to keep the thermals down, but you have to remove them in rare cases due to size differences. However, MSI bundled M.2 Shield Frozr in the motherboard, which maintains the temperature to a bearable point. ASRock took cooling system to another level in limited-edition Z490 AQUA edition. The Taiwanese manufacturer added physical heat-pipes in the IO Shield to eliminate excess heat produced during extreme tasks. MSI equipped Zero Forzr Technology and is exclusive to the MEG Z490 UNIFY motherboard only. You can control multiple fans from MSI software or BIOS. The brand used premium hardware to cover the IO Shield with 7W/mK thermal pad Aluminum Cover.