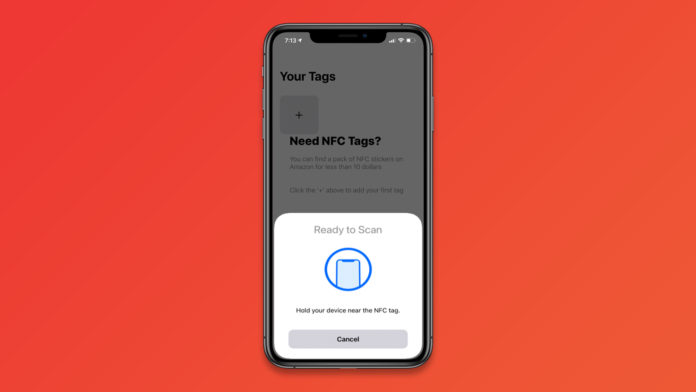 Several iPhones support the NFC tag reader to open simple tasks in the iOS device. The majority of Apple device users have no idea what NFC is and how to use it. I will fill the gap for you and provide an easy-to-follow guide, so you can open specific tasks without navigating in the software.

NFC (Near Field Communication) technology was first seen in Samsung NEXUS S, which was released back in 2010. However, Apple took nearly six years to introduce it in the iPhone. Now that we have mentioned the release year, then you should know none of the iPad’s support NFC features.

None of the iPad models support NFC and Apple skipped it because nobody would make payments from such a big device.

How to add NFC Tag Reader in the iOS 15?

Add the shortcut in the Control Center and quickly access the NFC reader.

You have successfully added the NFC tag reader shortcut in the quick panel, and it will show up there. The NFC will show up in the control center, and it looks similar to the Wi-Fi icon but counter-clockwise.

You can find hundreds of NFC tags at a cheap rate price at Amazon or other online shopping sites. Of course, you can pick the tags at a nearby Walmart store, and they don’t cost more than a dollar or so.

Do not overspend on expensive tags because it doesn’t impact the performance and longevity. Make sure to read the reviews from the verified buyers, so you can make the final purchase decision easier.

Create NFC Shortcut in the iPhone?

IOS 15 comes with the Shortcuts app pre-installed and if you have uninstalled it, then re-install it from the App Store. You can create an NFC shortcut from the app and it will initiate the process instantly.

Remember, you cannot use the NFC tag in another device until or unless it is set up on the secondary device. Make sure to set up the tag on another device as well, so you can use it on multiple Android and iOS devices.

How to Program NFC Tags in iOS 15?

We have shown you how to set up the NFC tags on iPhone in the iOS 15, but allow me to show you how you can program the tag itself. The tags don’t have permanent actions, and you can always program them to open different applications. However, you need a dedicated programming app available in the App Store, and we recommend NFC TagWriter (NXP) & NFC Tools.

You are greeted with several actions and tasks, and choose the action that you want the NFC tag to perform in the iOS 15 device. It’s permanent, and you can come back to modify the action later on, so play around with it. There is little to no risk in goofing around with the tags because they are cheaper and sustainable technology.

That’s it, you have successfully changed the NFC tag action, and you can repeat the process multiple times without risks involved. You can make the tags do anything in the iOS 15 and re-write the program several times.

Why iPad doesn’t have NFC technology?

Apple didn’t add NFC technology in any iPad model so far, which makes no sense to several consumers. The company didn’t provide any official news on why they chose to skip the feature, but experts have suggested that it is related to Apple Pay.

When was the last time you’ve seen someone making a payment from a tablet?

Yes, that’s what experts have stated during the conversation, and they have told the world that Apple skipped the NFC feature in the iPad because the consumer would not make payments on an iPad.

However, I argue that NFC does more than making payments via Apple Pay.

NFC is not safe as it seems, and it does have security loopholes, which does create a security threat. NFC terminals have loopholes, and a hacker can invade the device by wiring the unsafe network. Hackers can sensitive merchant information and attack the device by injecting malicious code into it.

Even iPhone has to face similar NFC terminal risks, so it doesn’t answer the fact why the iPad is missing NFC technology.

iPhone 7 or later devices can use an NFC tag reader and perform quick actions. Apple optimized NFC in iOS 15, and it does work smoothly without glitches. In case, if the Shortcuts app is missing, then you can download it separately from App Store.