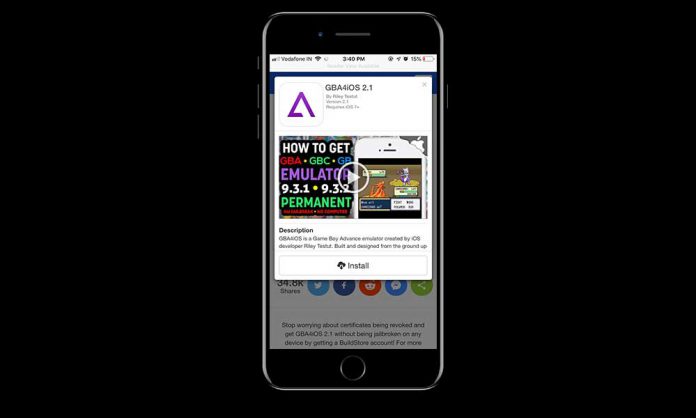 GBA4iOS is a miracle for old school gamers around the world. The technology revolutionized the gaming industry in the ’80s is not available in the modern gaming industry. The demand for modern graphical gaming has increased, which has put an end to the retro games such as Mario, Contra, and more. Apple’s App Store never supported classical games, and the policies stop official simulators in the app market.

GBA4iOS is a modern method to play retro games on the smartphone. The world gifted genius developers, who have put a lot of effort so, we can play retro games by installing GBA4iOS in iOS 12 and 13.

Let’s split the word GBA4iOS, GBA stand for “Gameboy Advance Emulator,” while iOS stands for Apple innovative operating system. The App Store rejected iOS simulator, which is one of the major reasons the GBA is missing from the store.

Is GBA4iOS Available on Apple Devices?

GBA4iOS designed to play outdated games from the ’80s, the ’90s and 2000s. The developers Jiang Xi, MicroBlog Technology Company, developed the application to support all iOS version, so do not worry about the support.

Almost, all iPhone’s and iPad have the graphics memory, RAM, and CPU-cores to support the older games. The outdated such as Mario does not demand higher hardware requirement, which makes it an extraordinary solution for the gamers. Imagine, you can play Contra (all versions) from GBA4iOS on iPad and iPhone.

How to get and install GBA4IOS on iPhone or iPad

Millions of people can install on iPad by following our lead in the tutorial. We have covered almost every step required to install the application.

iPhone X or Above: Follow the upper instructions, but tap on “SAE Magnetics Dongguan Limited” and then tap on TRUST to complete the process.

How do i install Games in GBA4IOS on my iPhone

GBA emulator comes with an app store within the application. The inbuilt app store contains no virus, malware, and adware, and we are claiming it. Allow us to display a short tutorial on installing the games in an iPhone or iPad.

Make sure to maintain the security level of the smartphone because third-party apps can penetrate the security.

Is GBA4iOS safe for iPhone?

Security is a major issue worldwide because the number of security breaches is increasing. Hackers are working hard from their end to penetrate the layers of protection and steal information. No one can afford to let a hacker inside the phone, and start saving personal data to an anonymous server in China.

I personally don’t trust Chinese based applications and services due to the thirst of data demand in the country. Chinese based apps taken down by the Google Play Store authorities due to suspicious activities, but you can research it as well.