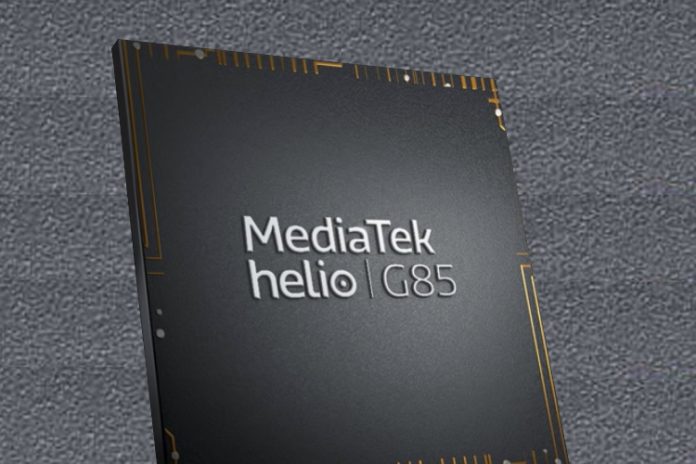 The Taiwanese mobile processor MediaTek announced a mid-range gaming-oriented processor. The world was introduced to Helio G80 in the form of Redmi Note 9 and Helio G85 is not a huge upgrade to the predecessor. However, MediaTek improved the product, in terms of gaming performance, and that’s what the company is highlighting.

The Octa-core successor processor packs two Cortex A75 processor clocked at 2GHz, and the rest of the 6-core is Cortex A55 based on 12 nm architecture. However, you won’t see much performance difference from the previous generation. You can compare the processor to Snapdragon 720G, where 720G CPU is powerful than G85. That’s also one of the reasons why MediaTek is bundling the product under the budget bracket.

Helio G85 GPU: The powerful point of the GPU is ARM Mai-G52 up to 1000MHz, meanwhile, Snapdragon 720G GPU is clocked at 500MHz. The Dual-core G85 GPU is 50MHz faster than predecessor G80 GPU. Of course, it won’t make much difference, if you already own G80 smartphone, but there’s more that might change your perception.

I should not compare the MediaTek gaming-oriented CPU & GPU to Snapdragon, but the phone manufacturers will bring the price of the device somewhere between $150 – $250, and most of the Snapdragon 720G equipped phones will come at a higher price. In terms of gaming, MediaTek has more offer here, when compared to the only competition.

HyperEngine Game Technology: The smartphone industry changed a lot since 2007 and the current demand of the consumers is shifting towards gaming. Everybody wants to play Battle Royale games and high-end graphical games and it requires good CPU, GPU, RAM, Network, and other aspects.

The most noticeable improvement will be in connectivity, while gaming. If your Wi-Fi internet stops working, then the HyperEngine will switch to LTE. If your LTE internet connection fails, then it will switch to Wi-Fi in 13 milliseconds.

Battery Efficiency: The Helio G85 also focuses on battery life improvement during gameplay or in idle state. In short, you don’t have to worry about the processor draining the battery charge during intensive CPU or GPU tasks. If the phone manufacturer doesn’t support fast-charging, then it eliminates recharging the battery countless time a day.

Helio G85 Display Support: The MediaTek Helio G85 supports Full HD+ display that has maximum 450-nits brightness. However, the display is missing a higher refresh rate panel, since this is a gaming-oriented phone. You won’t find higher refresh rate supported games, but it will be available shortly.

However, I do consider a higher refresh rate because that’s a trending feature in the consumer market. The G85 supports 60Hz display and that’s the maximum refresh rate supported in the processor. The Full HD+ display might support TUV Rheinland’s low blue light certification, and that solely depends on the phone manufacturer.

Camera setup: Most of the readers don’t realize it, but image processing is processed by the CPU coupled with GPU. The brands have the option to create their camera setup and to add wide-angle, telescopic, macro, and combination of dual sensors 16MP + 16MP. If brands want to go with a single-camera setup, then they can choose to add a 48MP camera shooter. MediaTek also improved the built-in AI to process image production for quality and in-depth details.

Previous articleASRock announced limited-edition Z490 AQUA Motherboard for $1,100
Next articleiPhone SE 2020: Is it worth to buy in 2020?