Apple App Library Not Working in iOS 15? Try to Fix It Quickly 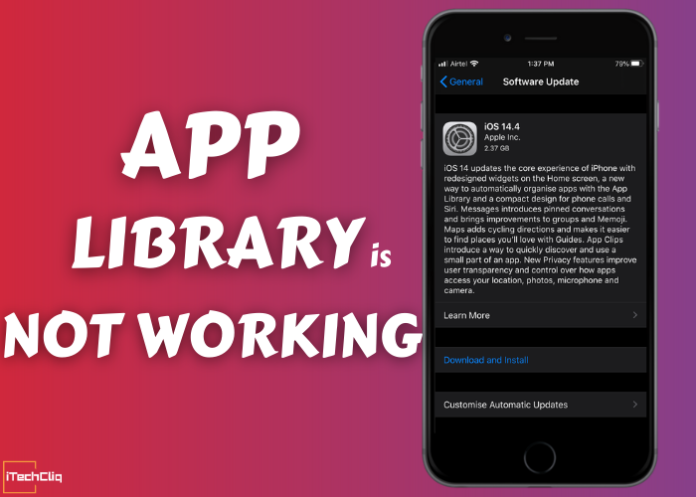 Apple made drastic changes to the user interface in iOS 14, and it is receiving a positive response from loyal device owners. The Cupertino-based company releases new software updates every year, which forces them to release unstable features, functions, and actions. Unfortunately, iOS 14 is not stable software for iPhone or iPad, and the app library is not working because of the bugs & glitches.

App Library Not Working in iOS 15? Try to Fix It Quickly

The biggest challenge for Apple developers is to figure out a way to solve it sooner. Fortunately, Apple released lots of updates later down the line to fix known bugs & glitches, and you can get rid of them easily.

Apple released six software updates in five months, and all of them have addressed bugs & glitches that bothered millions of device users. We implore the readers to check out online news, videos, and reviews related to the new updates. Unfortunately, the American premium device manufacturer is screwing up the devices lately. iPhone 6S & Watches suffered unexpected battery drainage in idle state, and there are lots of other problems.

iOS 14 has problem in the operating system and we recommend the readers to check out the online news publications and videos from YouTube creators for confirmation. You should keep the device model and year of manufacturer in mind because the performance output is different on old & new models. You can take watchOS 7 and iPhone 6S running iOS 14 have unexpected battery drainage. You have to look out for it or else you may end up with a useless phone or end up changing the battery.

The App Library settings are available in iOS 14 only, and you have to access them in the Settings app. You don’t get full control over the feature because it is limited in many ways, and Apple will introduce new options somewhere down the line.

You can play around with the limited options and find what’s working for you on an iOS 14 device. Remember, the results won’t be the same on different iPhones, iPad, and other models.

Re-install the app / Reset All Settings

You can take any app from the App Store because only big-time players can release iOS-specific updates like Spotify, FB, Twitter, and others. You have to delete the app from the device and re-install it again to resolve the issue, but it’s not enough until the developer does something about it.

An incorrect configuration in system files or corrupted settings files can lead to many problems. You can reset the settings in iPhone & iPad to get rid of the incorrect settings including bugs & glitches. Quick settings reset fixes lots of problems and give a new life to the software.

You can seek assistance from Apple discussions form to solve app library issues on iPhone & iPad. Remember, Apple is releasing new software updates every now & then to resolve known bugs & glitches. The Apple Library feature is relatively new and limited in many ways, but we can expect better versions sooner or later.

How to Block Someone on iMessage from any iOS Device

iPhone contacts not syncing with iCloud in iOS 15? 6 Tips to Fix